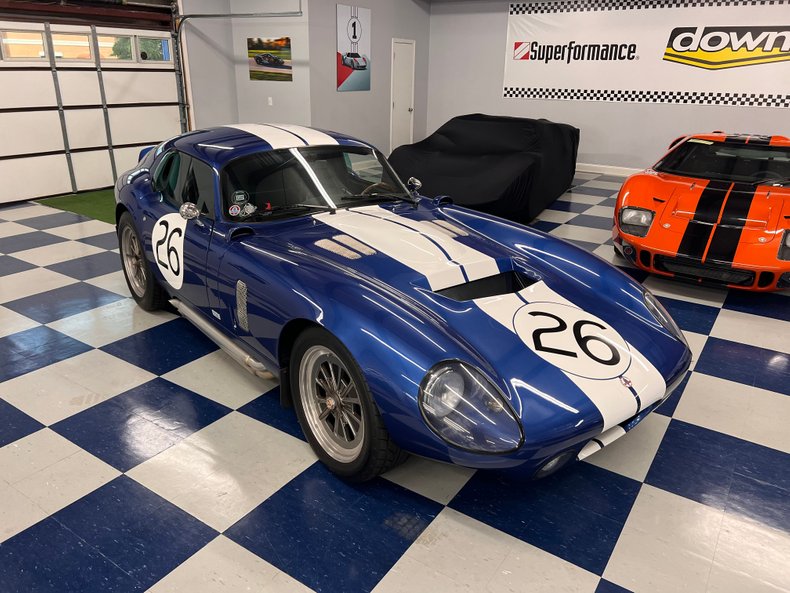 Successful on American racetrack but struggling on the larger European tracks the Shelby Cobra was deemed not aerodynamic enough to push beyond the 150/160 mph barrier. To remedy the problem Carroll Shelby turned to Peter Brock to make the Cobra capable of the speeds needed to compete in Europe. Brock penned the initial design and 90 days later debuted the new Cobra Coupe. Carroll named the new Cobra for the race they would debut at and the moniker of Daytona Coupe as stuck ever since. They won the FIA Manufacturers World Championship, still the only American manufacturer to do so, and captured the LeMans GT class title in 1964. Despite their success only 6 Daytona Coupe were built as Shelby's focus was soon shifted to the responsibility of making the Ford GT40 program successful.

The Superformance Daytona Coupe was designed by Peter Brock himself as he changed a few things he didn't have time to do in 1962. Tilt front end, opening rear hatch, power steering, heat and air conditions make the Daytona a joy to drive. Each Shelby Daytona Coupe comes complete minus engine and transmission and ready for your choice of small block Ford power! Be the envy of any show with the unique styling and appearance of the Daytona Coupe!

SPC0114 is a well cared for Daytona with only 2 owners and low milage. The Bob Bondurant #26 winning livery sets it apart from the crowd. Powered by a Roush 402 IR stroker engine topped with 8-stack EFI and backed by a new Tremec close ratio TKX 5-speed transmission make for a great combination for spirted driving or relaxing cruising. Titled and registered as a 1965 Shelby.
Contact us today to put this Daytona Coupe in your garage!